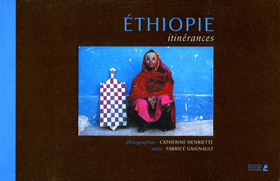 At an altitude of 1 855 metres, nothing interrupts their view. Facing northwards towards the great Damakil plains, or southwards towards the plains of Somalia, their eyes are filled with history and they do not know the meaning of the word “border”.  For centuries, from the heights of their enormous granite hill, the women of Harar have watched with curiosity as the whole world has come to take an interest in their Mecca, classified as a World Heritage Site. Obsessed by their indescribable beauty, Catherine Henriette sought to capture their incredible gazes in images.  She became a part of their daily lives, little by little, metre after metre, and was finally adopted by them. The sincerity of the tall woman with fair skin did not escape these women, and they invited her to share their afternoons, their chicha and their tea. Naturally, eventually they accepted to stare into the “black box”, to testify in the blink of an eye to the whole truth of the high-altitude flight of their lives. Finally, let us recall that a little over a century earlier the famous poet Arthur Rimbaud affirmed his passion for photography in this very place, by producing a number of portraits … 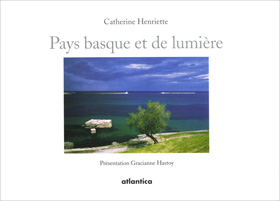 The French do not call one of their regions a “pays” (country) by sheer linguistic accident. Only a country possesses its own language, history, culture, cuisine and secrets, or has such a wide sphere of influence. Catherine Henriette lived there for ten years, allowing its rich heritage to inhabit her. In order to experience the full range of emotions that this unique country has to offer, she first let it speak to her through its operas. She then embraced it, passionately, seduced by its delicacies with names prefixed with “ch” and “x” and its hot peppers, obviously derived from Espelette.
She gave herself over to this place completely, leaving her reason in the car and losing herself in its countless corners, forests, paths, clearings and coastlines.  This country – which loves those who know how to love it – has granted her some of the rarest of images in return.